Project leader shoots for the stars 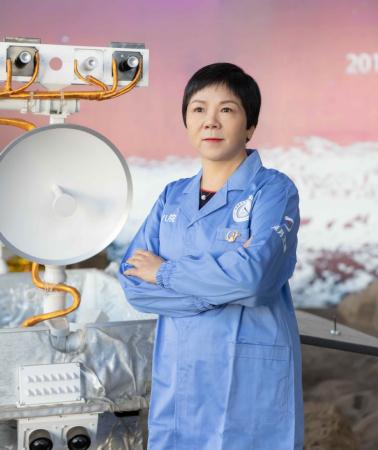 Zhang Yuhua at an exhibition in Shanghai. (Photo provided to China Daily)

Born on Mid-Autumn Festival day in 1968 when the moon was full, Zhang Yuhua has always believed her destiny was intertwined with exploring the universe.

A member of the scientific and technological committee of the Shanghai Academy of Spaceflight Technology and the China Aerospace Science and Technology Corp, Zhang has been a key player in China's major achievements in space exploration.

She worked as the deputy chief commander of both the Chang'e 5 lunar exploration project and Tianwen 1, China's first Mars mission.

Zhang formed a powerful team for the Chang'e 5 mission, which made the world's first unmanned docking and transfer of moon samples during a lunar orbit in December. Chang'e 5 brought back the first lunar samples in 44 years, and China became only the third country to return samples from the surface of the moon.

Her team also overcome major difficulties facing the Tianwen 1 mission, which was launched in July, such as the long flight time, developing sophisticated control systems and managing complicated space maneuvers.

The 5-metric-ton probe, which consists of two major parts-the orbiter and the landing capsule-had flown for 224 days and about 475 million kilometers as of March 4, according to the China National Space Administration.

It entered its preset orbit above Mars on Feb 24 and will remain there for about three months before releasing its landing capsule.

"My three decades of work experience coincided with the country's development from the era of manned space flight to lunar probe and deep space exploration," said Zhang, who works at such a rapid pace that her young colleagues struggle to keep up with her.

Born in Huzhou, Zhejiang province, Zhang was a straight-A student at school. She said she could have applied to study at prestigious universities such as Peking or Tsinghua, but decided to attend the National University of Defense Technology in Changsha, Hunan province. Part of her decision was based on the lower cost of living there.

After graduation, Zhang, who dreamed of becoming a scientist since childhood, obtained a job at the Shanghai academy and started designing the power systems of spacecrafts, a novel research field at the time.

Most popular in 24h